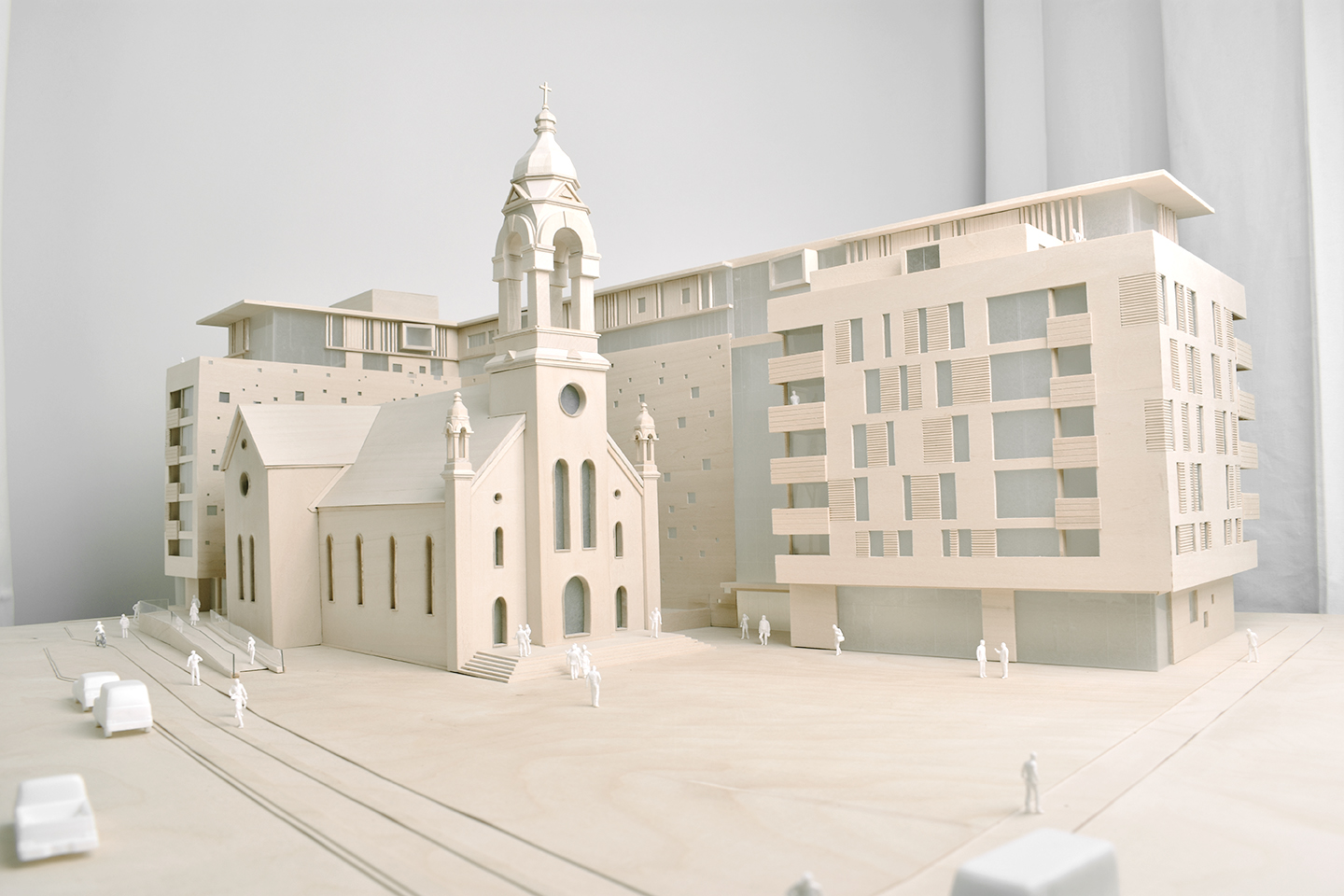 The Saint-Charles Market Project is located in Ottawa’s Beechwood Village neighborhood. This project is situated on city block occupied by a historic church between Beechwood Avenue, St-Charles Street and Barrette Street. The model was commissioned by LineBox Studio to present the project to citizens and authorities. It was carried out in 2017 and its execution lasted about 10 weeks. The overall dimensions of the model are 36 x 24 inches for a height of 12 inches.

First, the model is at a scale of 1: 100. This scale allows to represent the church that occupies the center of the site with its architectural details such as the steeples. The base of the model was made of Russian birch plywood covered with a maple plating to identify the city block on which the project is implemented. For the building, linden wood was used to designate all cladding materials. Its texture has been worked to demonstrate the variations in the facade of the new projected building. This made it possible to standardize the aesthetics of the two buildings present on the site: the existing church and the new building with condos and thus support the architectural concept of a unified development where the new and the old occupy an equal place.

The glazing of the model was made of acrylic, because an LED lighting system was incorporated into the base of the model to illuminate it from below. Then trees, furniture and people add life throughout the project and help to communicate the project scale. Finally, the model is covered with an acrylic protection case and was delivered directly in Ottawa by Maquette.ca. 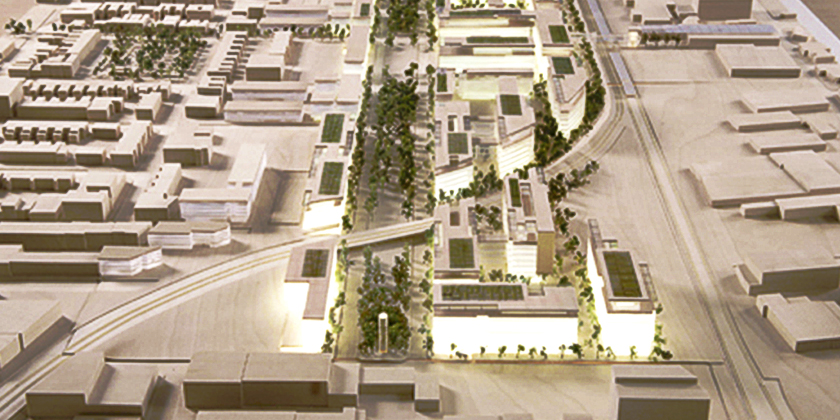 PRESENTATION MODEL OF A NEW CAMPUS FOR UNIVERSITÉ DE MONTRÉAL IN OUTREMONT, MONTREAL.

The Outremont Campus project construction site is former railway yard. It is located on the north side of Outremont neighborhood in Montreal. Provencher Roy commissioned this model in order to present the development of the project during consultations. The model was designed between 2012 and 2013 and its execution lasted between 16 to 20 weeks. Its overall dimension are around 48 x 96 inches for an approximate height of 6 inches.

The model, all elements of which are fixed, is at a scale of 1:500. This scale makes if possible to represent all the phases of development planned by the University of Montreal in a coherent whole in addition to situating it in the city. However 1:500th scale does not allow much detail on buildings whose volume only was reproduced. First of all, the strategy was to build the base of the model out of Russian birch plywood with the project’s insertion context, ie part of Outremont and Parc-Extension neighborhoods. Then, the buildings surrounding the project are represented with linden wood in a simplified way to emphasize the project itself while offering a realistic contextualization in the city.

Conversely, the new buildings were made of sanded acrylic blocks surmounted by linden wood roofs. For those to be illuminated, we have incorporated strips of LED bulbs into openings made through the base. Whan the new buildings are lighten up from under this gives them an appearance that contrasts with the rest of the model. Finally, the entire new development is bustling with vegetation  that help provide insight into the character of the institutional development and large-scale landscaping efforts in the area. The model was delivered with a transparent acrylic protective box and installed on a rolling table 36 inch high made with plywood.

To see the project currently under construction: http://campusmil.umontreal.ca/le-projet/

This model represents a 52-acre community development in the Dominion Bridge area of Lachine, Montreal. Development Lachine-East commissioned this model to provide a sales tool at the main office of the new development VillaNova. The model was designed between 2015 and 2016 and its execution took approximately 16 to 20 weeks. It’s overall dimension are approximately 60 x 120 inches for a height of 4 inches.

The model is at a scale of 1:500. This large scale makes it possible to represent all the planned development phases in a coherent way. It also allows to locate it within the city. First, the strategy was to build the base of the model with the context of insertion of the project which included the surrounding neighborhoods and a part of the Lachine Canal. Then, the buildings surrounding the project were represented in linden wood in a simplified way to emphasize the project itself while offering a realistic integration in the city.

Conversely, the new buildings were made of sanded acrylic blocks surmounted by linden wood roofs. This made it possible to illuminate them with strips of LED bulbs through openings made in the Russian birch plywood base. In addition, their illumination gives them an appearance that contrasts with the rest of the model.

The entire new development is bustling with the addition of vegetation that helps to give clients insight into the character of real estate development as well as extensive landscaping in the area. Finally, the Lachine Canal and Lac Saint-Louis were painted and highlighted with the use of liquid resin to give depth and some reflections similar to water as well as distinguish them from other surfaces (see: https://villanovacanal.com/).

The Jenkins neighborhood presents the first implementation phase of a vast community development in the Lachine sector of Montreal. Development Lachine-East commissioned this model in order to use it as an exhibit and sale tool at the new VillaNova development sales office. The model was designed between 2015 and 2016 and its execution lasted approximately 16 to 20 weeks. Its overall dimensions are roughly 48 x 72 inches for a height of approximately 6 inches.

The model is at a scale of 1:200, which allows to enter a precise level of detail while presenting the entire development. We built the individual buildings by carefully depicting the facade details as well as the outdoor spaces adjacent to the houses. We represented the desired atmosphere inside the neighborhood in addition to the relationship of the buildings to the street and the surrounding context. The base was made of Russian birch plywood finished with a linden wood plating to define the city blocks. In addition, these are underlined by the landscaping.  Moreover, to emphasize the project itself, the buildings surrounding the project are represented in a simplified way. Their volume offers a realistic context of insertion in the city and positions the project in all projected developments.

The two main materials chosen for this model are white styrene type plastic for its materialistic qualities as well as linden wood for its malleability. The assembly of these materials, at times dyed, has allowed to create different textures of facades while maintaining an esthetic harmony despite the different townhouses, duplex and condominiums included. Furthermore,  the whole model is animated by the addition of plants, cars and characters that help give a real insight to the customers of the character of the planned real estate development (see: https://villanovacanal.com/).