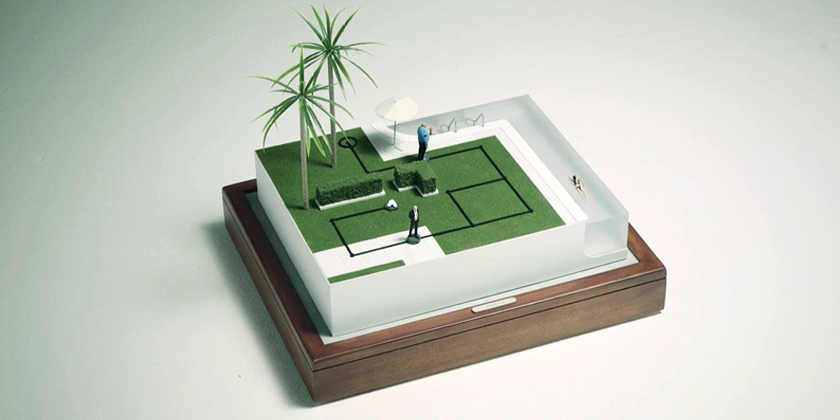 This model representing the game Hitman Go was commissioned by Square Enix Montreal to be displayed in their offices. This prototype was made in 2015 and its fabrication lasted from 2 to 3 weeks. Its dimensions are approximately 11 x 14 inches for an approximate height of 10 inches. This model, all elements of which are fixed, was built at a scale of 1:50. This scale allows a very high level of detail and serves to represent elements with great precision. All the elements constituting the model were made to mimic those modeled in the game Hitman Go.

The construction strategy was to first make the base of the model with Russian birch plywood and paint it. Then all the details such as the character’s traveling path, furniture elements and vegetation were made individually and assembled on the base. Furthermore, the characters were printed in 3D with black ABS to be identical to the characters present in the game. They were then painted by hand before being placed on the model.

The resin was cast in place last to continue the outline of the model and maintain the aesthetics of a virtual game board. Afterwards, the model was placed on a cherry wood display flame. Now the model is advertised on a podium and protected by a clear acrylic case.

Square Enix Montreal has also produced an explanatory video available online on YouTube which presents the relationship between the virtual game and the physical model:  Hitman GO: Handcrafted Edition