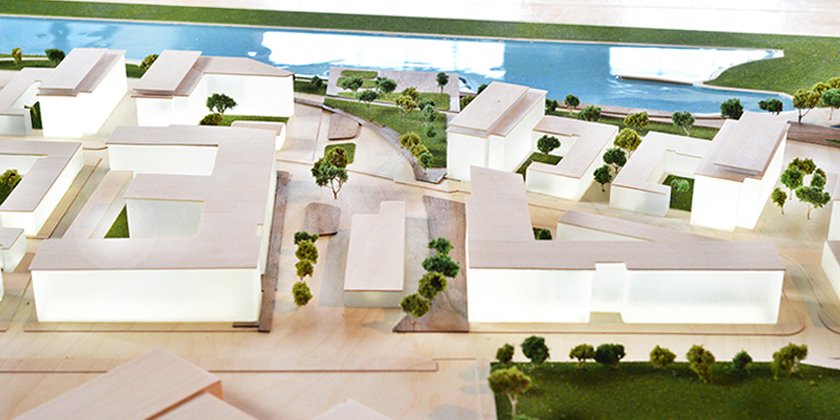 This model represents a 52-acre community development in the Dominion Bridge area of Lachine, Montreal. Development Lachine-East commissioned this model to provide a sales tool at the main office of the new development VillaNova. The model was designed between 2015 and 2016 and its execution took approximately 16 to 20 weeks. It’s overall dimension are approximately 60 x 120 inches for a height of 4 inches.

The model is at a scale of 1:500. This large scale makes it possible to represent all the planned development phases in a coherent way. It also allows to locate it within the city. First, the strategy was to build the base of the model with the context of insertion of the project which included the surrounding neighborhoods and a part of the Lachine Canal. Then, the buildings surrounding the project were represented in linden wood in a simplified way to emphasize the project itself while offering a realistic integration in the city.

Conversely, the new buildings were made of sanded acrylic blocks surmounted by linden wood roofs. This made it possible to illuminate them with strips of LED bulbs through openings made in the Russian birch plywood base. In addition, their illumination gives them an appearance that contrasts with the rest of the model.

The entire new development is bustling with the addition of vegetation that helps to give clients insight into the character of real estate development as well as extensive landscaping in the area. Finally, the Lachine Canal and Lac Saint-Louis were painted and highlighted with the use of liquid resin to give depth and some reflections similar to water as well as distinguish them from other surfaces (see: https://villanovacanal.com/).